What Happens if You Trespass on Private Property in California? 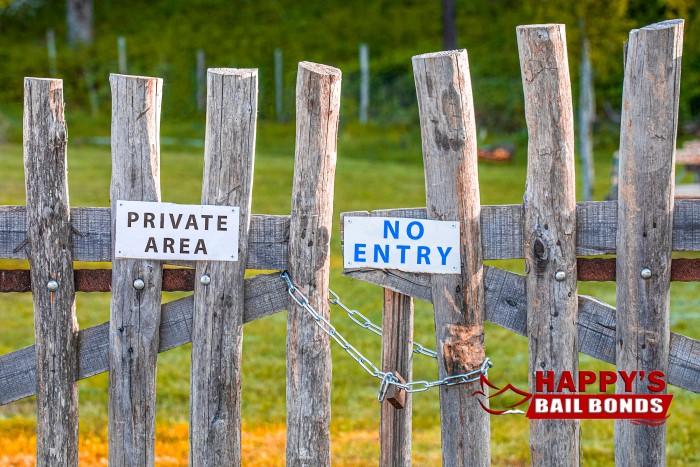 11 Jul What Happens if You Trespass on Private Property in California?

If a property owner contacts the police and reports that you’ve been illegally hanging out on their property, you’ll be arrested and charged with trespassing in California.

Amongst other things, the law states that you’re trespassing if:

“You drive any vehicle, as defined in Section 670 of the Vehicle Code, upon real property belonging to, or lawfully occupied by, another and known not to be open to the general public, without the consent of the owner, the owner’s agent, or the person in lawful possession.

Refusing or failing to leave a hotel or motel, where he or she has obtained accommodations and has refused to pay for those accommodations, upon request of the proprietor or manager, and the occupancy is exempt, pursuant to subdivision (b) of Section 1940 of the Civil Code, from Chapter 2 (commencing with Section 1940) of Title 5 of Part 4 of Division 3 of the Civil Code.”

The majority of trespassing incidents that wind through the California court system are handled as misdemeanors. If convicted, the maximum sentence is six months in jail and/or a $1,000 fine.

While the bulk of California’s trespassing cases is misdemeanors, occasionally there is one that is such a mild situation that rather than bring criminal charges against the defendant, the situation is handled as an infraction and the defendant is ticketed and fined.

The best way to avoid having to deal with trespassing in California charge is always making sure you have the owner’s permission before you set foot on their land.